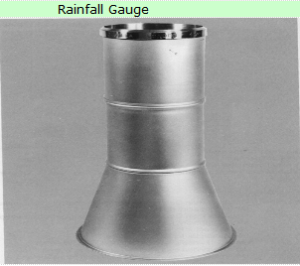 The Rainfall Gauge is used to measure the amount of rainfall over a specified area. The rain gauge is composed of three parts: a funnel, a measuring tube, and a 4-inch diameter overflow tube. The funnel directs the precipitation into the measuring tube and magnifies it by a factor of 10. This allows observers to report rainfall to the nearest 0.01″ (hundredth of an inch). The measuring tube, when full, will hold “one inch” of rainfall. When it rains more than one inch, the excess water collects in the overflow tube. 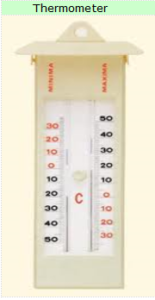 These thermometers are made from glass and consist of a glass bulb that is attached to a tube that is marked with a temperature scale. The liquid in the thermometer is usually alcohol or mercury. When this liquid warms up, the molecules in the liquid move faster and the volume expand. The expansion of the liquid causes it to move up into the bore and indicate the temperature. When the liquid cools, it contracts and moves back into the bulb, indicating a low temperature. 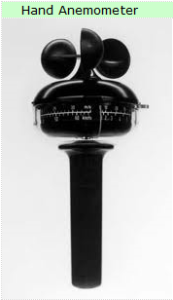 The Hand Anemometer is a small portable instrument that gives a direct reading of wind speed. Wind is air in motion. Differences in air temperature create differences in atmospheric pressure which, in turn, initiate air motion. This movement is modified by the rotation of the earth, which causes the wind to deflect to the right in the Northern Hemisphere. Another important factor is friction. High above the earth, the flow of air is smooth and continuous. At or near the ground this uniform flow is disturbed by the irregularities of the earth’s surface. Generally, the effect of these irregularities is to make the flow lighter but more variable, with lulls and gusts.

The Campbell-Stokes Pattern Sunshine Recorder is used to measure the duration of sunshine, (that is, the number of hours of sunshine per day). This is a tropical pattern suitable for use in the latitudes 5 Degrees South to 45 Degrees North. Bowl made of Tin-Bronze surface finished black painted and hard Lacquer, with a cut-glass sphere, mounted concentrically in a section of the spherical bowl, the diameter of which is such that when the instrument is exposed to sun rays they are sharply focused on a card held in the grooves of the bowl, the focused sunray’s burn a trace on the recording card which has a time scale printed on it. The length of the burn indicates the period of bright sunshine during the day. Complete in a wooden box with the recording cards for one year. 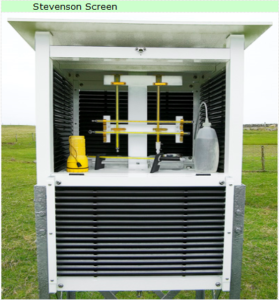 The purpose of the Stevenson Screen is to create a uniform temperature enclosure that closely represents the same temperature as the air outside. The screen is designed to shield thermometers from precipitation and direct radiation from the sun, while allowing air to circulate freely around them. It houses maximum and minimum thermometers and a wet and dry bulb hygrometer. It is made from wood with louvered sides to allow the free and even flow of air. The front panel is hinged at the bottom to form a door, which allows for maintenance and the reading of the thermometers. The whole screen is painted white to reflect radiation. 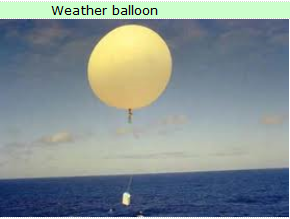 Weather balloon & Radiosonde are a group of instruments for simultaneous measurement and radio transmission of meteorological data, including temperature, pressure, and humidity of the atmosphere.

The instrument package is usually carried into the atmosphere by a balloon. Balloon-borne radiosondes can reach altitudes as great as 90,000 ft (27,400 m) above the earth’s surface. A radiosonde may also be carried by rocket, in which case it is known as a rocketsonde, or dropped by parachute (usually from an aircraft), in which case it is known as a dropsonde. Instruments included in a radiosonde are typically transducers for humidity, temperature, and pressure measurements; controls to improve return signals and determine which measurements are to be transmitted to data stations; and a radio transmitter. Radar also has been used to measure and transmit meteorological data from a radiosonde. These radiosonde observations are made as often as two times daily at some meteorological stations around the globe. 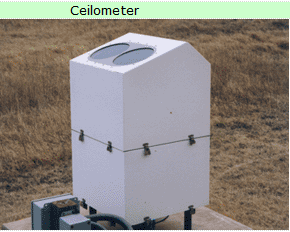 The Ceilometers is an instrument that measures cloud-bottom heights and vertical visibilities. The Ceilometer is a self-contained, ground-based, active, remote-sensing device designed to measure the cloud-base height at up to three levels and potential backscatter signals by aerosols. Model CT25K has a maximum vertical range of 25,000. The ceilometer transmits near-infrared pulses of light, and the receiver telescope detects the light scattered back by clouds and precipitation. 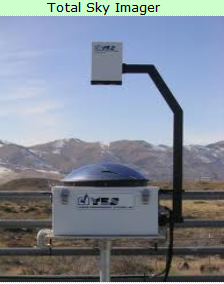